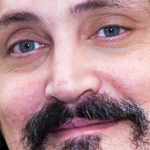 Details of the life of Mark Lumadue

I have been working with HTML and related stacks since 1997, when I realised you could publish artwork and poetry to the web without having to pay a publisher or fight with an agent. By 1999 I was working professionally, and landed a full time position at Centocor Inc. Within a year they were purchased by Johnson & Johnson, and I spent the majority of my career there, managing hosting platforms, leading international teams, and developing web sites for many different business divisions in Pharmaceutical Research & Development.

Over the many years I cut my teeth on many different technologies, some web related and others not, but I ended up with a deep understanding of Information Technology and enterprise infrastructure, as well as the realities and challenges of a large organization. I have also been involved in several FDA submissions, supporting the submissions and presentation teams, as well as acted as the FDA audit technology lead for a couple of different R&D sites. One day in 2011 I woke up to discover I was also a Project Manager, and have managed a dozen or so projects (some more I.T. related than others) from inception to final delivery, working with teams around the world to deliver web solutions to the business.

In my spare time I take care of my two boys, play with the dogs and the cat, collect pop-culture items, play a little guitar, play dem vid'g-games, dream of setting up my train set, and watch a lot of movies (I have a B.A. in Film Arts, which drives my wife nuts). My main hobby is the web, and so here I am when I should be doing other things making web pages - because that is what I do - make web pages. I dream in HTML. I kid you not. I have dreams, real life dreams, parsed in HTML and CSS (with a little JavaScript thrown in), which can be somewhat of a curse. So even if I don't know the technology you are interested in, or if you say I don't have a CompSci degree (they called it Computer Engineering when I was a youngster, and they called nickles bees...) so I don't know what I am doing, I laugh in your general direction, and go back to making dem web pages.

This site is created using Composer/Drupal8, Bootstrap, JavaScript, jQuery, AngularJS, JSON, HTML5, CSS3, Microformats, Micro Data, and way too much Font Awesome. This site was originally hand-tooled in Notepad++, until I finally got my Drupal hosting environment together (see Mindpack Studios, below). All artwork was created (or at least edited) in GIMP. I normally used to use Photoshop until Adobe lost its mind and started a $ub$ciprion $ervice, and it turns out that GIMP is really really good. Besides, my youngest Mac is coal & steam powered and I care about the environment. The Husky Ninja logo was designed and created by James Norman, who I have worked with extensively over the years. Project tracking and sprint planning was done in Yodiz. This site was entirely hosted on AWS, until I woke up one day and realized I was being robbed, and it is now hosted on Kyngin by Mindpack Studios.