Back in late 2010 I was contacted by a member of the R&D Communications group about their externally facing site that promoted the Paul Janssen Award, an award given yearly to an individual or team for their contribution science that contributes to the improvement of human health. I had heard about issues related to the site, specifically there were a number of additional domain names that had been purchased in an "unsupported" manner by members of the business, but this was not about any standing issue. The team member contacted me about leading a redesign of the site, adding some additional functionality, and then taking ownership of the site once this project was complete. Design assets had already been developed, but the team member was unable to navigate the complex review requirements that our regulated organization had put in place. 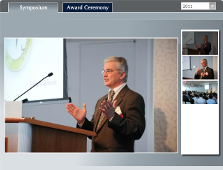 The Flash Gallery component added in 2013.

The Flash Gallery component added in 2013.

Since this was my first external site assignment (but not my last) I began with a meeting with the demand coordinator at central I.T. Services. Together we created the FRS and the SOW based on the supplied business requirements and assets, and once approved I was connected to the development team. At this stage in my career, I acted as the Product Owner on a waterfall based project (the company had not yet moved into Agile). The project was completed in the three month window, but as usual deployment was delayed due to regulatory review. Finally, the redesigned site was launched in early 2011.

Over the next 4 - 5 years I was responsible for updating content and artwork, creating new pages, and acting as the go-between for the business and support. After the first year the domain name issues were resolved as the alternative names expired. Usually, there is little activity around the site, with the exception of twice a year, when the nominations are opened and when the winners are announced. I made sure that the support agreement with central I.T. services included enhancement hours, which could be used for simple site enhancements (like the addition of the Flash Gallery) without having to spin up a new project, which would incur increased costs and require a full regulatory review cycle, which can add months to something that could be completed in a week or less, but for most updates I was directly responsible. Armed with the original art assets, I could make changes to the original PSD files to support new winners and basic site updates, add new side effects when creating new pages, and generally handle most requests made by the business customer.

As for the site itself, it is mostly vanilla Drupal 6 with FCKEditor (all updates were done in raw HTML due to style requirements) and IMCE (used only for file uploads). Most recently, the Flash Gallery was added for event images, but was insufficient for videos. Early in 2014 I obtained a license for Brightcove from the corporate license pool. Video hosting has always been an issue, with solutions limited to flat file storage. I have looked into transcoding solutions in the past, but they have always been cost prohibitive, and limited to the local network. With the Brightcove license, I had a corporate approved solution that could transcode for different devices and deliver externally while limiting host names and referrals. With this new tool, I was able to deploy videos directly to the site without additional development costs.

In late 2014 I began to plan the project for updating the site to Drupal 7 to meet I.T. standards, just like I had for the other Drupal based external sites, when my time at Janssen came to an end. Sadly at that point, my involvement with the site ended. The site can be viewed at www.pauljanssenaward.com, but I have not been involved in any updating of the site since the end of 2014. As of the day that I am writing this, there have been no significant changes made to the site, and the redesign from 2011 is still in place. Please note, any and all images and related content are property of Johnson & Johnson and Janssen R&D LLC.