After my successful presentation to the TEDxJ&J Spring House presentation in the fall of 2013, I was invited to assist with a special break-out session at the 2014 TEDxJ&J Philadelphia innovation event. This break-out session was to meet with the leaders of the J&J retiree groups and discuss with them something that they have been asking about for several years, a J&J sponsored web site that would allow them to share news and information about their organization. In addition to myself, there was a representative from both Corporate Communications and Human Resources, so it appeared that there would be commitment from the corporation for such an undertaking. 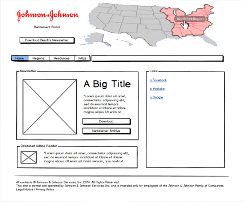 The original session went fairly well, and I was able to gather five user stories that could be turned into functional requirements. These all centered around communications and engagement. I also saw a major opportunity for the corporation as a whole: Retirees from the organization can act as spokes-people to the general senior community as "knowledge shapers" (since they had worked at a pharmaceutical company they must know a thing or two), providing information about new products and explaining the company's side of any news story. After the event I had some discussions with both Human Resources and Legal about any possible restrictions or liabilities in addressing the J&J retirement community, and with this information I was able to define the scope of the project.

In short, the site was to provide news and information to different retiree clubs based regionally around the country, including a global news letter, company news, global resources, company sponsored events, and a welcoming message from the president of the company. Each region would have their own "sub-site" where they could publish monitored and approved club news, events, contacts, and related links. Regions would be trained and encouraged to use social media outlets (i.e. Facebook) to distribute more detailed and potentially "controversial" information (pictures from the club social with the potential of members and their guests drunk and otherwise acting outside of the prescribed image of the company - having a good time). This site would be flexible enough to add additional regions as they evolved or appeared, and would generally comply with company policies regarding internet sites. 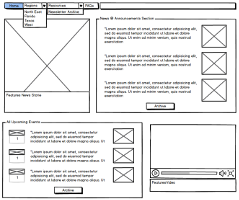 After the high level FRS and wire frames (designed by James Norman) were completed, I was able to obtain a rough estimate regarding cost and a rough time-line for development; three months at $35,000. I realise that this cost is rather high, as it would be expected to run in the $10 - 15K range in the open market, but this cost was an internal cost and included a number of intangibles related to large corporate infrastructure. I presented all this information to the Communications contact, who was very excited about the work and the prospect of the site, but could only commit to $7K. At the end of the day everything relied on the Human Resources representative who could work their contacts in leadership to gather additional funds. In the meantime, I continued talking with the retiree group members, letting them know of the progress, and advising them to work with their legacy contacts within the company to ensure proper funding.

After a couple of months of this the wheels came off. The corporate leader who had dedicated themselves to funding had suddenly experienced a career change, and the Human Resources representative would no longer attend the bi-weekly status meetings. Finally, the Communications representative pulled the plug, and I had to go back to the different retiree club representatives to let them know that this project was dead.

Of all the projects I have been involved with that failed, this is the project that leaves me the most disappointed. No only was there an opportunity to engage the history of the company and have them act as agents for the organization, but it also was the most innovative external site that we had engaged: Innovative not in design or programming, but innovative in a social sense. This was a chance to be involved in memetic engineering that went beyond the typical corporate "we are wonderful we give money to non-profit X and here are stock photos of culturally diverse people smiling" and reach into a community leadership group to give them tailored information to drive corporate imaging within their demographic. In exchange, this group would be able to engage within their own larger community, and grow their own organization.